Amtrak with a Wheelchair

This episode is brought to you by a recent trip I took on Amtrak Cascades from Seattle to Portland.  The important thing is that this is a day trip with no sleeper cars.  I’ve read that Amtrak overnight trains do offer accessible sleeper rooms, such as the Superliner Accessible Bedroom and the Viewliner Accessible Bedroom, but I haven’t experienced them, so I can’t speak to them.  I also can't speak to the commuter trains that run on the Eastern Seaboard, except to say I remember them being especially complicated and requiring advanced planning for travel with a wheelchair.

There are two key things about the Amtrak Cascades route.  Firstly, it is one of the most beautiful rides in the world.  I would recommend the trip simply for the view.  The train tracks run along the coastline of Puget Sound, past the infamous Tacoma Narrows Bridge, along the Cowlitz and Columbia Rivers, through beautiful countryside in the middle of western- Washington and -Oregon, across the mighty Columbia River just north of Portland (Roll On!).  Unbelievably, the northern leg of this route, from Seattle to Vancouver, BC, is possibly even more spectacular, since it hugs the coastline of Puget Sound and its islands … and includes an international border crossing to boot!

Secondly, Amtrak is almost always late.  Amtrak trains run on tracks owned by the private railroad companies (ie BNSF), so these freight trains have the right-of-way.  An Amtrak passenger train must stop to let the freight trains pass when there is not room for both, thus necessarily lengthening the journey.  These waits can add up.  There was a time in my life when I rode this route every other week for over a year, and I think the average time for the 3 ½ hour trip was actually 4+ hours.  There were perhaps 2 times in that entire period where the train was actually on time.  So, bring a good book and enjoy the view!

Ten years ago, when I was a rode this train frequently, I traveled on a portable three-wheeled scooter.  This weekend I made the trip in my power chair.  Over that decade, the trains improved, the reservations process became much easier, and Seattle and Portland grew exponentially.   As a result of these changes, the wheelchair experience is smoother and nicer, but many things remained similar.  Details …

Fortunately, the reservations system has improved.  Ten years ago, it was possible to book online, but not if you had a wheelchair.  Those of us with “special needs” had to go through Julie, the automated attendant for the voice system at the 1-800 number.  I learned very quickly to yell “agent” at Julie as soon as she answered, lest I be trapped in the voicemail system from hell.  I must admit that that is a lesson that has served me well in other hellish voicemail situations.  At any rate, the reservations system has improved, such that even wheelchair-users can reserve a seat online.  There is even a box to describe whether you will be traveling with a manual chair, power chair, or scooter.  There are restrictions for maximum dimensions, but I think that most wheelchairs and travel scooters will have no problem with them.

You can now receive and print your e-ticket via your email, so you can (and should) print your ticket ahead of time.  Still, I would arrive at the station about 45 minutes before departure time, since passengers needing assistance are the first to board.


At major stations, you should look for the “Red Cap.”  This is, believe it or not, a person wearing a red cap.  He or she is responsible for storing baggage and for helping “special needs” passengers board the train.  This includes assigning you a seat and boarding ticket, directing you to your boarding car (or driving you there in an electric cart), and handing you off to the staff at the car.  You can find the Red Cap major stations by simply looking around for a staff member wearing a red cap, or you can ask someone at the ticket counter where to go.  They will usually take your ticket to obtain a seat assignment and then ask you to wait in a special area before they come back to help you board.  In Seattle, I had to get my own seat assignment, but the Red Cap found me and helped me board at the front of the line of departing passengers (maybe 15 minutes before departure).  In Portland, the Red Cap found me almost immediately, obtained my seat assignment and ticket for me, had me wait by the gate, and came back to direct me to my car 35 minutes before the train’s departure.  In stations without Red Caps, you can ask what to do at the Ticket Counter. 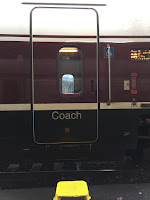 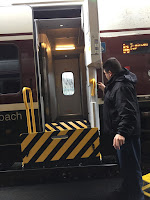 Most passengers board the train by using a step stool.  That doesn’t work so well for passengers with wheelchairs or mobility impairments.  As a result of the ADA, I think all trains requiring a step stool now have a lift installed in at least one of the cars.  Theoretically, your assigned seat will be in that car as well.  The Red Cap can direct you to the accessible car (he or she can even help you get there, if needed), and a train attendant will lower the lift and then help you board.


If everything works as planned, your reserved seat will be just around the corner.  The old trains had these ridiculous fold-down transfer seats, giving you a choice of either staying and riding in your chair, transferring to an uncomfortable fold-down seat, or hoping the train would be empty enough to transfer to a regular train seat. The new trains are great!  On the trains in both directions, I was assigned a real train seat with an adjoining space large enough for my power chair, giving me the option of sitting in my chair or transferring to theirs. 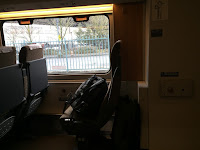 Because mine was a short trip, I didn’t need to check any luggage. I had a backpack with my computer, which I stowed on my wheelchair.  I also had a small, rolling carry-on suitcase, just big enough to hold a few items and my wheelchair battery charger.  When it wasn’t raining, I carried the backpack and rolled the suitcase behind me.  When it rained (this was, after all, the Pacific Northwest!), I held both bags on my lap.  Out of Seattle, there was no staff around after I boarded, so the passenger in the seat ahead of me helped me stow the suitcase.  When I arrived in Portland, another passenger helped me retrieve my suitcase from the rack above my seat.  On the return trip the newer train I rode had space behind my seat for my suitcase, so I stored it there, with the help of a train attendant.

On board, you get to enjoy about four hours of forced relaxation.  Every once in a while, I’ve been on a train that shows a movie, so if you bring your own headphones, you can watch and listen.  But that has been pretty rare, so I don’t count on it.  My favorite stretch on this route, for what it’s worth, is just south of Tacoma, when the train goes along the coast, with views toward the islands, the peninsula, and the Tacoma Narrows Bridge, until it finally veers inland. 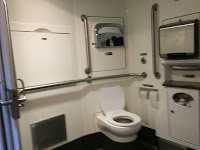 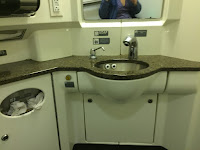 The restroom on this particular train was really wheelchair –accessible.  I’ve also ridden this route on the long-distance Coast Starlight, which supposedly has accessible restrooms (it is the law, after all), but the restroom in my car had a giant garbage can, which was too heavy to move and too big to allow my scooter to fit.  This one, fortunately, had a truly accessible restroom.  The doorway was extra wide, with a sliding door.  The room itself was large, with plenty of room to turn around.  There were several grab bars around the toilet – both horizontal and vertical.  The sink and paper towels were both accessible. 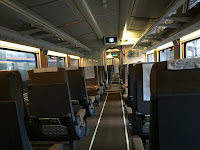 The center aisle on the train is fairly narrow, which is why the accessible seat is right next to the entrance/exit and the restroom.  In the past, my scooter was narrow enough to fit between the chairs and travel the aisle, but my power chair was too wide.   Amtrak literature claims that passengers in wheelchairs can have food from the bistro car brought to them, but I’ve never tried that. Rather than rely on the train staff  (whom I never saw) to bring me food, I brought my own.

Improvements in the Amtrak reservation system, allowing even passengers with wheelchairs to reserve and purchase their tickets online, make the ticketing process simple and quick.  Newer trains offer spacious seating, a dedicated transfer seat with adjoining space for a wheelchair/scooter, and truly accessible restrooms.  Traveling with a wheelchair on Amtrak ranges from possible to enjoyable, depending on the type of train and the attention of the staff.  The train will probably be late, but the forced relaxation time on board – as long as you remember to add some time to your schedule –  is actually a gift.  Next mission – an overnight train and sleeper cars!

Posted by Jenny Schmitz at 4:38 PM