I live on Capitol Hill – not the home of the nation’s government, but the densely populated
neighborhood on the Left coast.  This area is a haven for alternative lifestyles, coming together around a statue of Jimi Hendrix, rainbow crosswalks, ever-changing restaurants, craft cocktails, and endless bars.


The neighborhood is home to several urban parks, attractive to wheelchair users as well as to the general public.  Of course, as the neighborhood name warns, there is an extremely steep hill to climb to reach the parks at the top.  It is also a place where the sidewalks are so bad that I sometimes go down the streets, even though the streets are terrible!

The two main parks are a study in opposites.  Cal Anderson Park, named after Washington state's first openly-gay legislator, is an urban park surrounded by apartment buildings, and inhabited by people seeking a spot of grass in the middle of city,  people playing sports on the playfields, and people with nowhere else to be.  As my husband says, every time we visit this park “I just hope that everyone keeps his pants on.”  There is a hard-packed gravel trail around the perimeter, with branches into the center, allowing access to the park’s grass and amenities. There is always a hubbub and excitement, and it's a great location for people -watching while eating an ice-cream cone from nearby Molly Moon's. 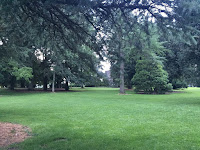 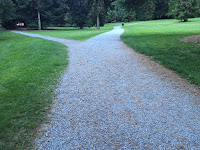 Volunteer Park is more sedate.  It is a more traditional park, laced with big trees, home to the Asian Art Museum and Shakespeare in the Park, and surrounded by stately mansions and western views.  As an urban park, it experienced a period of drug deals and other deviant behavior, but it is much more calm and traditional than Cal Anderson Park. There are a few gravel trails winding through the park, allowing up-close encounters with the big trees.  Unfortunately, the terrain is quite hilly and the trails are short, but the big trees and expanses of grass create a tempting escape for an afternoon picnic with a Frisbee or book.

While neither park offers a network of trails interesting enough for a dedicated wheelchair hike, both parks offer great picnic and people-watching possibilities accessible to an off-road wheelchair.  Choosing one over the other is simply a matter of your mood at the time.
Posted by Jenny Schmitz at 5:17 PM