I've always felt at home in the big trees.  The tricky thing is that big trees are correlated with big roots, making travel via wheelchair extremely difficult.  I am happy to report that my new Freedom Chair tackled with aplomb those roots (up to 6" high) and accompanying rocks on some muddy dirt trails over the weekend.  Weeks Falls Trail in Olallie State Park, near North Bend, WA is a short but beautiful dirt trail along a river and through a mossy old growth forest (photos 1-3).  The Tradition Lake Loop, on Tiger Mountain in the Issaquah Alps, begins with an ADA-rated, hard-packed gravel trail, surrounded by ferns and trees (photo 4), leading to a network of dirt trails. 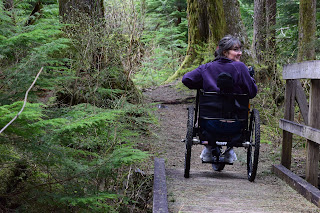 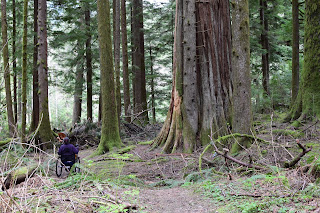 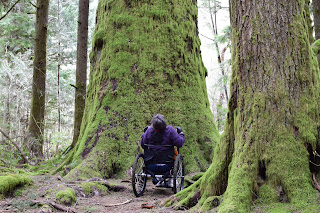 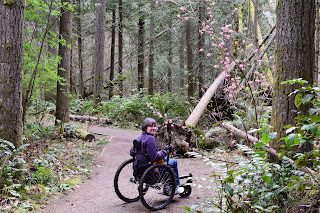 Ending the curiosity of the UPS delivery woman,  I signed for the receipt of my newest toy, the Freedom Chair from GRIT.  The assembled chair is impressive --big, knobby mountain bike tires, a third wheel in front, and arm levers for maneuvering and braking. 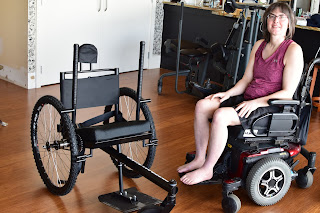 Posted by Jenny Schmitz at 3:58 PM No comments:

My last real hike was several years ago to the lookout at Mt Pilchuk, on the Mountain Loop Highway north of Seattle.  I completed the hike to the 5327 foot high lookout and back by using two forearm crutches.   The 5.4 mile hike took me 7 hours.

My husband and I had moved to Seattle in 2002 partially because of the mountains, with grand plans for hiking in the North Cascades, doing the Wonderland Trail, etc.

Life did not cooperate, however, as my mobility declined, and I became a reluctant party to a parade of “toys:" hiking poles, cane, forearm crutches, a battery-powered scooter, and eventually a wheelchair.

My next “hike” occurred years later, with the help of a folding manual wheelchair.  Only a few, short, paved ADA-approved trails were on offer,  but I was able to open up a whole world of possibilities of unmaintained trails by swallowing some pride and accepting help from generous and hard-working relatives and especially my spouse. 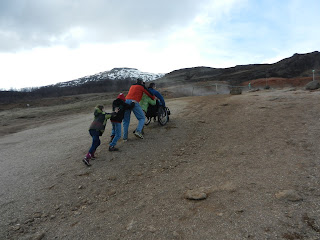 Perpetually on the lookout for a contraption that could better master the stones and roots and vagaries of unmaintained trails, I added a FreeWheel – a third wheel sticking out of the front, which lifted my tiny casters off of the ground and made possible the trails of Iceland, the cobblestones of Italy, and the woods of British Columbia. 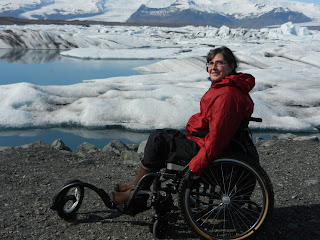 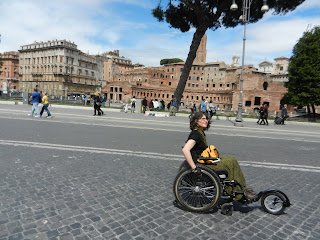 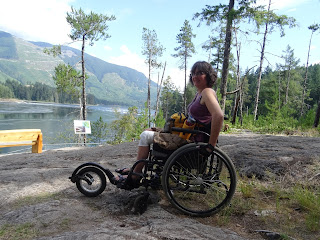 Several years ago, I learned about an all-terrain chair made by a company called GRIT.  At the time, they were only producing this chair for the developing world; however, they had plans to make a version for use in the US, so I got on their mailing list.  Early this year, the company sponsored a contest –the winners of which would receive an all-terrain Freedom Chair for one year, in return for having adventures with it and posting them on social media.  Soon after application, I got a phone call with the good news – I was one of 10 contest winners nationwide.  Thus begins a year of adventures and postings.
Posted by Jenny Schmitz at 1:04 PM No comments:

I am a passionate traveler and avid outdoors fan.  When MS eventually changed from a diagnosis to my reality, I entered a new life as a wheelchair user.  For an active person such as myself, the loss of mobility is accompanied by a loss of identity.  How could I answer the question, "Did I like to backpack?" when, of course, I did, but the plethora of lesions on my spinal cord rendered me physically unable to do so.  So, I set about the long process of recreating a life and an identity for my new reality.  I figured out what many people with wheelchairs already know: you can do many of the things you once did as an able-bodied person -- just differently.  I started this journey by participating in the adaptive skiing program at Outdoors for All, a local organization offering programs in outdoor activities to people with disabilities.  From there on, I discovered other local organizations specializing in activities for disabled participants: Footloose (sailing), Little Bit (horse riding), and Pushing Boundaries (exercise).   With the help of an engineering and enterprising spouse, as well as helpful relatives, outdoor activities, such as hiking, camping, kayaking, and cycling could all be a part of my life again.  By engaging in a little creative reframing, eschewing vanity and pride, taking advantage of existing resources, designing needed new ones, accepting help from strangers and friends, I rediscovered a purpose, an identity, and a joy.
Posted by Jenny Schmitz at 6:04 PM No comments: