The Old Sauk River Trail is my current favorite trail.  Off of the Mountain Loop Highway (SR 530), the 1 mile ADA loop through mossy forests includes an accessible river viewpoint.
The medium-packed gravel parking lot in the forest hosts disabled parking, an accessible (across the gravel) outhouse, and picnic tables (one of which is wheelchair accessible).
The trail is a 1 mile loop through the forest, with a riverside view of the Sauk River.  One spur presents steps down to the river, while one offers a stair-free, ramped path down.  The latter is completely accessible.

The loop itself meanders through stands of Douglas fir, cedar, and various alders.
In general, the trail is level enough for a manual chair and wide enough for any wheelchair.   There is one point where the trail narrows significantly, but I was able to wheel through it.

The trail surface is dirt, except for one wooden bridge over a creek.  It might become impassable after storms (muddy path, downed trees, washed-out bridges). I don't know that for sure; it's just a precautionary warning.

Posted by Jenny Schmitz at 3:31 PM No comments:

The Iron Goat Trail was built on the site of the former Great Northern railway.  The trail was abandoned as a railway passage when a snow slide in the early 20th century killed nearly 100 people, and a tunnel (still in use today) was built instead, turning the abandoned railway passage into a recreational trail.  Because of the obvious snow danger in these steep slopes, it's not advisable to hike the trail when there is still snow and slide danger. 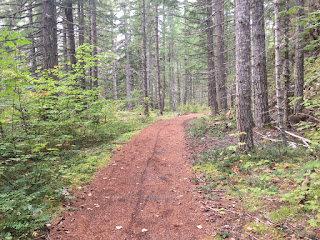 A three-mile section of the trail is officially designated as an ADA trail, with a wide path that has a level side-slope and is surfaced with hard-packed gravel and dirt (strewn with pine needles and big-leaf maple leaves in the fall).  Because the trail slope is railway grade, power chairs can traverse in either direction, but I would advise manual chairs to start at the Martin Creek trailhead and travel downhill, incorporating  some kind of shuttle to bring the car from the upper parking lot to the lower lot. 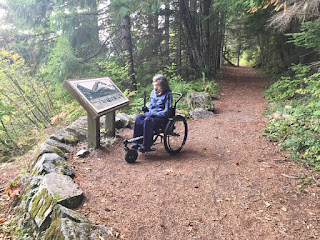 The trail runs through the forest off of Highway 2, with view of the old railway tunnels, big leaf maples, streams, fungi, and a few interpretive signs along the way. 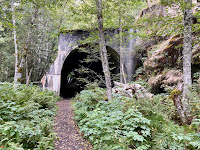 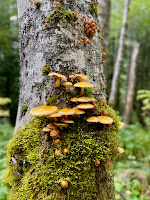 The gravel parking lot has disabled parking, an ADA outhouse (currently closed), and a non-ADA picnic table.  The trail begins with a boardwalk, and it has some sections that travel upon bridges or boardwalks.  But most of the trail is hard-packed dirt and gravel.

Posted by Jenny Schmitz at 3:23 PM No comments: