Growing up in North Central Wisconsin, I remember white seas of trilliums carpeting the ground in the woods.   I recently discovered that there is a Western trillium in WA state, so last week I went on a hunt.  My husband, Ted, and I went on three hikes, based on trip reports of trillium sightings.   Much to my excitement, we found the flowers, beautiful amongst the ferns; however, it was more like hunting Easter eggs than looking at a white sea. 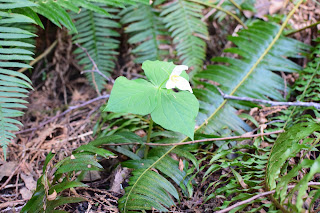 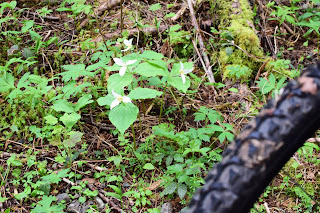 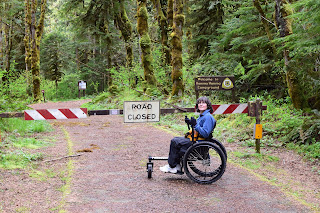 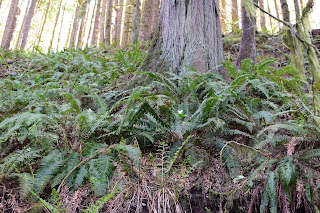 The surrounding forest, however, was beautiful, with big, mossy trees, green ferns, and even some rhododendrons waiting to bloom. 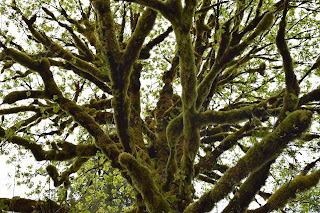 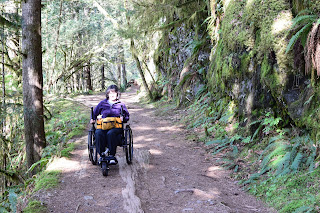 Trip planning centered on the perennial search for appropriate trails.  I have an old book published by the Mountaineers entitled “Accessible Trails in Washington’sBackcountry,” but it is over 20 years old and hasn’t been updated (no, I am not detail-oriented enough to want to do so!).  The Washington Trails Association has a wonderful, searchable database of trails, so my next step was to search online and to remember personal sightings.


Our first hike was on the Boulder River Trail off of the Mountain Loop Highway.  It was listed as recommended for families with children.  I think WA children must be superstar hikers, since the trail turned out to be not so wheelchair-accessible, traversed by me only with serious assistance from my own personal superman (Ted), as we went up steep and rocky hills and faced three daunting challenges.   The first was a steep dip into and out of a gully about five feet deep.  That was successfully crossed with help from a passing hiker.  The second was another steep gully – this one not quite a steep but lacking a solid path across.  Continuation was accomplished thanks to Ted’s bridge-building skills and physical stability.  The third challenge was, unfortunately, insurmountable – a large, uneven rock taking up most of the uphill trail that was already narrow and bounded on both sides with obstacles (one side being a steep cliff).  Unfortunately, I wasn’t able to make it to the waterfall on that trail, but I did accomplish my goal of finding trilliums and hiking in the woods. 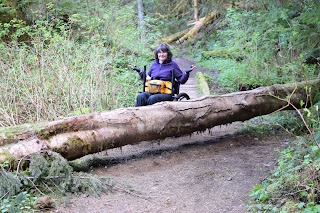 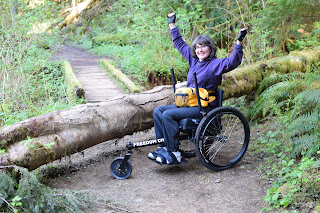 The second trail was out of the Hamma Hamma Campground on the Olympic Peninsula. Ted had spotted it on a previous backcountry expedition and thought it might work.  We were greeted with trilliums, and we actually managed to complete the trail – but only with a lot of pushing by Ted and by taking the road (rather than the trail) on the second half.  One of my scariest moments occurred on this trail, when I was on a narrow trail right next to and slanted toward the icy river, with my feet strapped in. 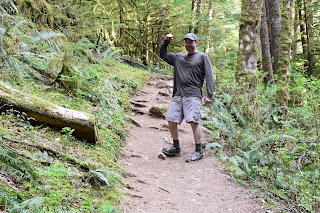 The third hike was the result of a WTA trip report that described trilliums and a trail that an elderly father was able to hike.  On the trail to Murhut Falls on the Olympic Peninsula, we again hiked through beautiful mossy woods with a few trilliums.  And we again hiked up steep, rocky hills that I could never have managed by myself.   I got to see the waterfall at the end only because we ditched the wheelchair at the edge of the trail (much to the following hikers’ consternation), and Ted carried me on his back over a 12” root and up a steep, rocky, narrow trail to the lookout.

So, I will continue my search for appropriate trails.  In the meantime, thanks to Ted and my Freedom Chair, I’ll enjoy the challenge of these non-accessible trails, the joy of being in the woods, and the occasional trillium.

Posted by Jenny Schmitz at 5:54 PM