Camping with a Wheelchair

As a self-righteous twenty year old, I spoke indignantly about the harmful environmental impact of jet skis, the stupidity of cats being given anti-depressants, my annoyance with RVs, and the people who camped with big tents and lots of paraphernalia.  But, the truth is that I have always loved riding jet skis, my cat will probably soon be on Prozac, I would love to have an outfitted RV for future travels, and I now enjoy car camping with a huge tent and enough stuff to warrant a car top carrier.  You grow up.  And you do what you have to do.

I spent my first six summers at a wilderness camp in Northern Minnesota, where canoes, tents, and campfires became a part of my growing self.  I then spent many a weekend in a tent with my family, car-camping in the woods of Northern Wisconsin.  As an adult, I spent a lot of time backpacking on the West Coast and abroad, camping in the backcountry, trying to thwart thieving bears, jumping in ice-cold lakes, eating rice and beans, and trying to stay warm or cool enough.

When I lost the use of my legs, I thought I had also lost the wilderness in my life.  With a concentrated effort of creativity and flexibility, along with a good dose of humility, I found my way back into camping again.  After years of experimentation and adaptation, I finally found a set-up that works for me.  Backpacking might no longer be possible (although I still haven’t given up on the idea of wheelchair backpacking), but camping near a car was definitely feasible.  Yes, I was returning to car-camping!

At first we stuck to developed campgrounds in state or national parks.  These generally offer at least one accessible campsite next to an accessible restroom.   Ideally that campsite has a flat site with a flat tent space and a picnic table with part of the bench cut away to make space for a wheelchair.  The restroom offers flat entry, at least one larger stall with bars, and sometimes a larger shower with a seat.  Of course, at times there are illogical details that ruin the accessibility, such as a tent platform that is raised several inches above the campsite ground.  Or the road between the accessible campsite and the accessible restroom is itself not accessible.    In such cases, the unconventional problem-solving skills of MacGyver (including the stand-by supply of plywood and duct tape) are required.

We soon graduated to camping in less-developed and even unmaintained areas, bringing its own set of challenges.  Creativity and flexibility became even more important, as we had to search for a site that I could get to and around, paying attention to access and obstacles, as well as to ground surface and incline.  Creativity also comes into play when cooking and eating at a non-accessible picnic table – or possibly no table at all.
We started with our old three-person tent, sleeping on the ground.  Gravity helped me down and my husband helped me up.  We soon discovered the wheelchair-accessible Freedom Tent from Eureka.  This tent (no longer in production, unfortunately) comes with a non-threshold vestibule for storing the wheelchair and side openings for better positioning when entering the tent.  Gravity and assistance were still my means to get down and up, however, so the situation – however much improved – was still not ideal. 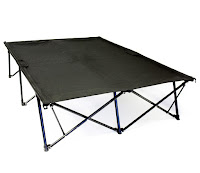 Solving the problem of transferring between the wheelchair and sleeping bag, we bought a double cot, which was the height of my wheelchair and was sturdy enough for transfers.

In order to fit the cot, we bought a huge tent.  It seems that tent size corresponds with age in a parabolic curve.  The younger and older you are, the larger your tent.  My tent is large enough to accommodate a double cot, my wheelchair, and all of our personal gear.  It has doors on both sides, allowing both people to exit from their own side, which is important, since the cot uses up the entire tent length, wall to wall.  I am able to roll over the door’s threshold by holding it down with the carpet we’d taken from the floor of the car’s trunk, storing it rolled up in the tent when not in use.  All of this is brilliant, of course, as long as you don’t care about carrying large, heavy objects.   Yes, we are now the ones car-camping in the huge tent! 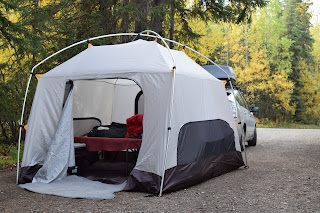 Along with the tent and cot, the other big consideration for wheelchair camping is the toilet.  You simply can’t rely on finding accessible toilets, stalls, and restrooms wherever you want to stop, and many times there is no restroom at all.  When you can no longer squat in the woods, a simple activity becomes exceedingly complicated and limiting.  For women it is doubly complicated.  This issue became a special concern of mine last fall, as we prepared for a road trip from Seattle to the Arctic Circle via the Canadian Yukon and Northwest Territories, both of which have almost no accessible restrooms and long stretches of road with no restrooms at all.

Our “brilliant” solution – which turned out to be not very brilliant or novel, since the internet already had a name for it, and it is well-known among the RV crowd and campground hosts  – was a bedside commode in a privacy tent.  The bedside commode was just a generic one, with strong attached bars, used by elderly and disabled people at home and sold online with bags and desiccators that can be thrown in the garbage.  The tent in which it was housed is called a privacy tent – also sold online, and advertised as a place to change clothes, take a shower, or use a toilet while camping. It is just big enough for the commode and a wheelchair.  It is easy to set up, so it is a great solution for long road trips with good pull-off opportunities.

In order to fit all of these new toys, as well as my wheelchair and our other camping supplies, we bought a cargo box for the top of the car.

With these new toys and an able-bodied companion, I am able to camp in developed campgrounds and undeveloped forest wilderness.  Yes, it is car-camping, and yes, I have a big tent.  But, I am camping.  And I am starting to wonder about an accessible RV…

Posted by Jenny Schmitz at 2:45 PM